Two Are Better Than One

(From: “My Utmost for His Highest” - Oswald Chambers)

If the closest relationships of a disciple's life conflict with the claims of Jesus Christ, then our Lord requires instant obedience to Himself. Discipleship means personal, passionate devotion to a Person - our Lord Jesus Christ. There is a vast difference between devotion to a person and devotion to principles or to a cause. Our Lord never proclaimed a cause - He proclaimed personal devotion to Himself. To be a disciple is to be a devoted bondservant motivated by love for the Lord Jesus. Many of us who call ourselves Christians are not truly devoted to Jesus Christ. No one on earth has this passionate love for the Lord Jesus unless the Holy Spirit has given it to him. We may admire, respect, and revere Him, but we cannot love Him on our own. The only One who truly loves the Lord Jesus is the Holy Spirit, and it is He who has “poured out in our hearts” the very “love of God” (Romans 5:5 - 5:1-11). Whenever the Holy Spirit sees an opportunity to glorify Jesus through you, He will take your entire being and set you ablaze with glowing devotion to Jesus Christ.

The Christian life is a life characterized by true and spontaneous creativity. Consequently, a disciple is subject to the same charge that was leveled against Jesus Christ, namely, the charge of inconsistency. But Jesus Christ was always consistent in His relationship to God, and a Christian must be consistent in his relationship to the life of the Son of God in him, not consistent to strict, unyielding doctrines. People pour themselves into their own doctrines, and God has to blast them out of their preconceived ideas before they can become devoted to Jesus Christ.

The Holy Spirit as the Dynamic of the New Covenant.

I actually came across this particular manuscript quite by chance. It wasn't in Ern Baxter's section on the Holy Spirit - it was in a very detailed unpublished book he wrote on Israel. However it couldn't be more relevant (I would argue) for this series I am putting together on; "The Kingdom of God only becomes reality through the Holy Spirit". Here he examines the foundation for everything we believe in - the Cross but moves on to argue that we need desperately the vitality that the Holy Spirit brings to make it life. It is a short but powerful piece. 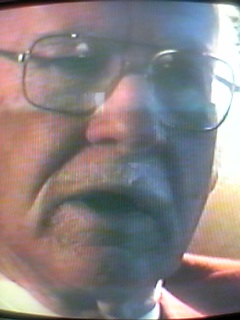 The Holy Spirit - the Dynamic of the Covenant.

The blood of the Lord Jesus Christ does not have an active ingredient but the blood releases the Holy Spirit. It is the Holy Spirit who convicts me, converts me, regenerates me, illuminates me, heals me, leads me, guides me, quickens me and eventually will translate me, all on the basis of the blood. But if we talk about the power in the blood and are all taken with the blood, we are taken up with our legal release but we haven’t entered into our vital release. The vital release comes by the Spirit. The Spirit is the dynamic of the New Covenant. When He promised the New Covenant, He said, “I will put My Spirit in you; I will write My laws in your heart”.

My daughter Anna was going to accompany me on the piano as I played the above piece on the trombone. But - a woman tried to steal the book that contained the music score, so she could know ahead of time what I intended to do. I finally discovered it hidden in her sweater, and recovered it.

Interpretation: TTAQ. Title: “The Lost Chord”; Theme: “A Frustrating Preparation”; Affection or Feeling: “Frustration and Difficulty”; Question to Holy Spirit: “What was God's purpose and thinking in giving me this dream?”

I am to link it with the above reading by Oswald Chambers for today, and with W. J. Ern Baxter on the Holy Spirit and Covenant Versus Blood and Covenant, for they have a common denominator. Can you find it?

Bill Allan in Port Alberni prepared me to enter the Vancouver Music Festival in 1940 for the Province of BC. He selected “The Lost Chord” for me to enter the competition of brass instruments: trombone in my case. He had been a Salvation Army Band Conductor in his past, and because of his able help, I came off first in the Province for trombone, and second for all of brass.

Arthur Delamont, conductor of the World famous Vancouver Kitsilano Boys Band was quite upset, because I came ahead of his first trombone player, who had not received the excellent preparation that Bill Allan had given me. “The Lost Chord” was the favorite solo piece that Arthur Delamont used with his trumpet on many occasions.

In 1942 when I attended the UBC (the University of British Columbia), I played in the Varsity band under the leadership of Arthur Delamont. Later in the Spring of 1943, because he was short 3 players in the Kitsilano Boys Band, he invited me with 2 other ex-Kitsies in the Varsity band to join them in their Spring Tour of Vancouver Island. This fulfilled a boyhood dream for me. I had since 10 years of age always wanted to play with the Kitsilano Boys Band, and here this desire of my heart was fulfilled for me at the age of 19.

NOTE: Now - how do the above 3 events tie together? Shortly after Oswald Chambers made a full surrender of his life to God in Dunoon, Scotland, and after a 6-year death-like struggle for full surrender and commitment to God, he made a round the world trip with a Japanese believer being at the time temporarily in Britain. They passed through Seattle, Washington on the way, which meant a great deal to him.

Ivan Panin by insight, discerned the reality of “Neighborhoods” in Bible Numerics. I felt the Spirit nudging me last night to apply this “Neighborhood principle” to the 4 major Pacific Northwest cities of Cascadia. Seattle is but 3 hours south of Vancouver, BC, linking Chamber's World travels to “Seattle's neighbor to the north. Also by “neighborhoods”, I am now 86 by taking my birthday on July 5, 1923, -3.

A Russian lady had a vision following 1962, and saw a sign-post with the name of a city on it pointing West. When she was asked what it was, she could spell it, but not pronounce it. It spelled out “SEATTLE”, but she pronounced it "SEEtle". She said that God revealed to her that in the future, He would bring a remarkable Visitation to earth preceding the return of His Son, and its organization would have much to do with Seattle and its 3 surrounding cities! See my mailing under “Archives” on our Website <www.2rbetter.org>entitled “Revival Principles”, 2009-06-29. One of the items touches on a revival principle concerning Samuel's 4 cities linked with “Cascadia.

Quite by chance last night I discovered a new Website directed to W. J. Ern Baxter of Vancouver. For a number of years he pastored “Evangelistic Tabernacle” of Vancouver, perhaps the largest congregation of the city at that time. Within this website I came across an article he wrote concerning the difference between God's covenant and blood, and His covenant and the Holy Spirit. Baxter pointed out that the blood aspect high-lighted the “legal” aspect of covenant, but the Holy Spirit aspect, the “vital”. He felt the average believer who recognized the importance of God's New Covenant, was yet powerless, because he stayed with the blood aspect of the Tabernacle's “Outer Court”, instead of going into the Holy Place, where the Holy Spirit vitallybrings forth “signs following” through the Gifts of the Spirit in that Holy Place!

Do you agree with his insight? I do.

So these 3 events noted above, have the common denominator of “Vancouver, BC”,- linking it with Seattle, Portland and Spokane. In August of this year, key leaders committed to Revival, will be meeting in Portland to consider God's present-day Revival Principles that will usher in His last day Visitation to this region prior to the return of His Son. - J.A.W.